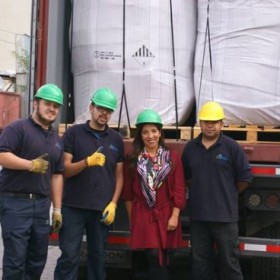 May 20, 2016 – WorldLoop’s partner Fundación Chilenter – Chile – , recently marked a milestone in responsible e-waste recycling  with the export of 14.77 tonnes of cathode ray tubes (CRTs) to Belgium, equivalent to 1.840 units of this toxic electronic waste. The container, shipped by WorldLoop’s partner Mediterranean Shipping Company (MSC), has been transferred via our partner Coolrec, to recycler Jansen in the Netherlands, which proposes a safe recycling solution for toxic and residual waste fractions like CRT glass. The shipments are made possible due to a grant that Fundación Chilenter received from the Chilean government.

During 2016, it is foreseen that, with the WorldLoop’s continuous support, Chilenter will ship a total of 250 tonnes or 30.000 CRTs. Cathode Ray Tubes are considered  dangerous and toxic e-waste with a negative impact on health and environment when not recycled or disposed of in a responsible way. While CRTs are disappearing as a new product on the market, there still is a large amount of end of life CRTs all over the world waiting for an environmental friendly retirement.

At the beginning of April, Chile approved the Law for the Promotion of Recycling, which not only includes and regulates the Extended Producer Responsibility (EPR) system, but also enhance Chile’s interest in establishing a culture of caring for the environment, and e-waste management. Fundación Chilenter is at the forefront in handling e-waste, one of the six priority products determined by the Law for the Promotion of Recycling.