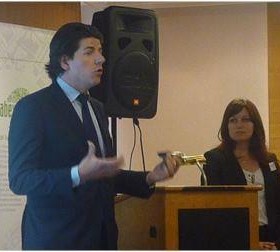 WorldLoop had the opportunity to present the NGO perspective in a multi-stakeholder event on the concept of expanding the standardization of recycling processing and handling standards, across the EU member countries to an international context.

The WEEELABEX Testimonials, organised in the context of the 20th anniversary of the LIFE Programme, brought together innovative recyclers, WEEE producer responsibility organisations, producers, enforcement agencies and standardisers to report how WEEELABEX is helping them in taking on the electronic waste challenge. One plant that as first has undergone ‘WEEELABEX conformity verification’ will be awarded the first pilot WEEELABEX audit certificate. There will be scope to discuss issues and meet the press.

WEEELABEX is the acronym (‘WEEE LABel of EXcellence’) of a project, run by the WEEE Forum in co-operation with stakeholders from the producers’ community and processing industry. The project (2009-2012) is co-financed by the European Community under the LIFE programme (LIFE07 ENV/B/000041).

The WEEELABEX project aims to design, on the one hand, a set of European standards (or ‘normative requirements’) with respect to the collection, sorting, storage, transportation, preparation for re-use, treatment and disposal of all kinds of WEEE, and, on the other hand, a set of rules and procedures that will guarantee harmonised conformity verification. The project affects all parties with whom the WEEELABEX compliance schemes (producer responsibility organisations) contract with, especially logistics companies and electronic waste processing firms.

The standards and the WEEELABEX conformity verification organisation will level the playing field by making environmental performance more transparent. The prospective new business will stimulate operators to meet high standards, while fraudulent companies will find it harder to dodge ‘the system’. Operators that have not been ‘WEEELABEX approved’ due to failure to comply with the standards will be subject to easier scrutiny by the authorities.

In time, the European standards organisations will translate at least parts of the WEEELABEX requirements into formal EN standards that confer a set of rules for all operators on the market to comply with the Directive.

The WEEELABEX standards are the world’s first continental, comprehensive and coherent set of requirements on operations from collection to disposal of WEEE. As such, they have started to resonate globally; standardisers in other parts of the world have identified WEEELABEX as a source of inspiration.

Some 10 WEEE producer responsibility organisations in the WEEE Forum have voluntarily committed to implementing the standards in their contracts and to gain experience in 2012, including partners of WorldLoop. Those ‘early birds’ are: RECUPEL (Belgium), Wecycle (the Netherlands), Ecolec, Eco-asimelec, Ecofimática, Eco-RAEE’s and Ecotic (Spain), ReMedia and Ecodom (Italy), Eco-systèmes (France), SENS, SLRS and SWICO (Switzerland), Lightcycle (Germany) and RoRec (Romania). All other WEEE systems in the WEEE Forum will have the requirements in place by 31 December 2013 or 2014 (Eastern Europe).