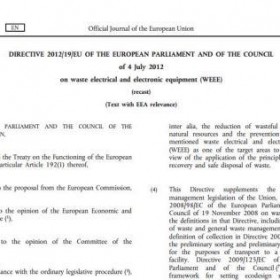 Last month, the European Parliament made an impressive move in updating the Waste Electrical and Electronic Equipment (WEEE) Directive of 2003.

The EU started coming up with more ambitious targets and arming Member States with tools to fight the illegal shipments of WEEE disguised as used equipment, requiring more testing and documentation for exported shipments.

The original collection targets for EU Member States was 4kg of WEEE per capita, which would count for 1/5 of the WEEE generated. The new targets, endorsed by Parliament, require Member States collect 45% of the electrical and electronic equipment put on their markets in 2016, and 65% by 2019. For Member States with less infrastructure or lower levels of EEE, they can opt to forego the previously mentioned milestones and target 85% of the waste generated.

Recast of the WEEE Directive