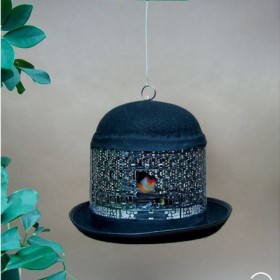 communications October 28, 2013
AIR (www.aironair.com), WorldLoop’s strategic partner responsible for developing and managing the renaming of WorldLoop in 2012 entered WorldLoop in the Creative Club of Belgium’s “Bowler Hat” competition.
In 2012, AIR put a team of dedicated creatives to the task of coming up with a new name for Close the Gap’s e-waste recycling project, WorldPC. AIR developed the entire brand concept and name around WorldLoop, as the perfect representation of our mission to turn the e-waste problem in devloping countries into an economic, environmental and human solution.
Let your e-waste bloom into a beautiful new life.The essence of what WorldLoop stands for was more than inspiration enough. Not only to give something a new purpose, but also to create a new way of economics and life around it. So of course the only logical thing we could do with the hat was to turn it into a birdcage.
~ Karl Magnus and Wendy Wauters, AIR Creative Team

About The Creative Club of Belgium’s Bowler Hat Competition

To celebrate the 30th anniversary of the CCB Awards competition – and as the bowel hat as its symbol – the Creative Club of Belgium organizes, “The Bowler Hat Competition”.
Each registered competitor receives a plain bowler, and decorates it in the most creative way, relating this creative to one client or brand. All the decorated bowler hats will be exhibited and offered for sale at auction, for the benefit of the Creative Club of Belgium.