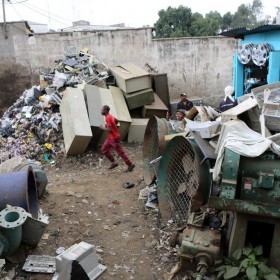 April 20, 2015: “Buried within the 41.8 million tonnes of waste was more than 16,000 kilotonnes of iron, 1,900 kilotonnes of copper and 300 tonnes of gold as well as other precious metals such as palladium. The combined value of all these valuable resources was about $52bn.”

The latest report from UNU takes a look at global e-waste volumes and their flows as well the potential opportunities in urban mining based on the global quantities of e-waste as well as measures that can be taken to put the appropriate infrastructure in place to reduce the toxicity of some of e-waste’s fractions.

By promoting sustainable urban mining and recycling, such valuable resources not only support a more circular economy but also drives new opportunities in social businesses.