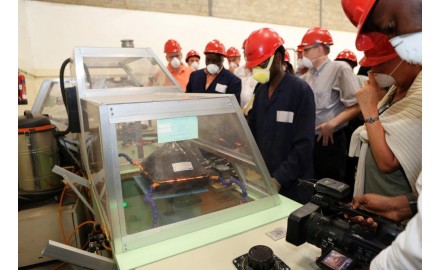 “WorldLoop is a major partner of the Waste Electrical and Electronic Equipment Centre in Nairobi Kenya, not only supporting e-waste management in Kenya, but also helping create structures to support other countries in the East African region and Africa as a whole. The financial and technical support provided so far makes Kenya and the WEEE Centre the pioneer champion of e-waste management in Africa.” Mr. Tom Musili, Executive Director WEEE Centre

WorldLoop provided seed capital and business plan support for the establishment of the WEEE Centre. It also supported the purchase of recycling equipment necessary for the safe extraction of valuable material and the disposal of hazardous fractions.

Today, WorldLoop is involved with the WEEE Centre by providing technical expertise and operational support, and by managing the recycling and disposal of complex and hazardous fractions.

Check out the latest news on the WEEE Centre here.

ABOUT THE WEEE CENTRE

Launched as a pilot in 2010, WEEE Centre was the first e-waste recycling facility in East Africa that came into being with support from Computer Aid International, Safaricom Foundation, Close the Gap and WorldLoop. On September 27th 2011, WEEE Centre was formally inaugurated as the first WorldLoop recycling facility in the presence of Vice-President of the European Commission Neelie Kroes.

Kenya generates an average of 3,000 tons of e-waste each year from computers, monitors, printers, mobile phones, fridges, batteries and other devices. A lack of e-waste awareness, along with poor separation and disposal systems, has led to e-waste being mixed with ordinary waste in dumps.

The WEEE Centre is addressing these problems by taking a leading role in managing e-waste and spreading awareness about it. It takes advantage of every opportunity to sensitize the Kenyan population to e-waste and promote ways of participating in the WEEE Centre’s cause.

The Waste Electrical and Electronic Equipment Centre (WEEE Centre) is at the fore front managing e-waste and spreading awareness to the Kenyan population about the same. Lack of awareness is rampant and the WEEE Centre takes every sensitization opportunity to let the public know more about e-waste and how they can participate in the WEEE Centre’s cause and drive e-waste collection. Initiatives undertaken by WEEE Centre to increase awareness about e-waste in Kenya include specific campaigns aimed at corporates, campaigns aimed at consumer awareness in partnership with SAMSUNG and SAFARICOM and speaker positions on events such as the Pan-African Forum on E-waste management hosted by UNEP.